Help us support the people of Ukraine and be a part of setting a new world record!

We are raising funds to support the people of Ukraine through Razom, as well as fighting hunger here in Chicago by attempting to set a new world record for the largest cereal box mosaic. Kellogg’s has generously donated 5,000 boxes of cereal (Rice Krispies and Corn Pops) that we will use to create the Ukrainian Flag and break the current Guinness World Record. Once the mosaic is completed, Kellogg’s will donate the cereal to the Greater Chicago Food Depository.

How you can help:

Sponsor boxes of cereal -  $25/box or a custom donation through GoFundMe. 100% of donations go to Ukraine through Razom (see below).

When is this happening?

Set up for record setting attempt is August 10 and 11 from 12pm - 5pm with a grand reveal of the finished mosaic flag at 5pm on August 11. On August 12, we will need additional help to pack up the cereal for the Greater Chicago Food Depository. Donations for cereal box sponsorship are being accepted now.

Donate to our GoFundMe to help support the people of Ukraine 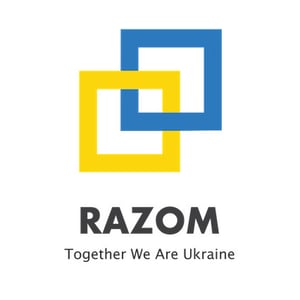 100% of this money will go directly to Razom for the people of Ukraine.
Today, Razom Emergency Response project is providing urgent help in the face of an extreme situation: the sovereign nation of Ukraine is forced to deal with a brutal invasion. Razom is responding by working with volunteers on the ground and partner organizations to provide critical humanitarian war relief and recovery depending on the most urgent needs as they evolve. Tactical medical equipment and hospital supplies are already in the hands of the people who are saving lives. More is on the way nearly every day.

Getting this project off the ground

We are so thankful to these sponsors

Wintrust Financial Corporation has generously donated their Grand Banking Hall for the project.

Kellogg's has very generously donated all of the cereal via their Better Days Commitment. The cereal will then be donated to the Greater Chicago Food Depository once the mosaic is completed.

Sherry Koppel has generously donated her time and expertise to help layout the Ukrainian flag for the mosaic.

Donating the cereal from the mosaic

Kellogg's Better Days Commitment is driving growth through purpose – addressing food security and creating Better Days for 3 billion people by the end of 2030. The Greater Chicago Food Depository was chosen to receive the 5,000 boxes of cereal once the mosaic project is finished in order to give back locally to our community as part of the project.

This project can not happen without you! We are so grateful for your time and efforts to help us break the current Guinness World Record. We are humbled by any generosity that we have received from our sponsors, donors and volunteers for this project. 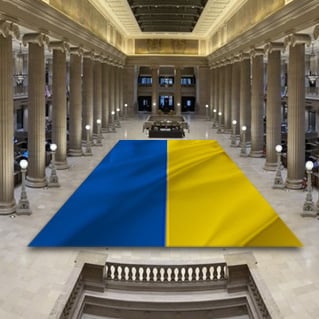